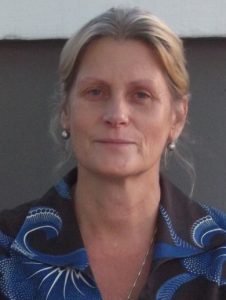 Kim Hein (Ncube-Hein) is a graduate of the University of Adelaide (Australia) with a Bachelor of Science (Hons) in Economic Geology, and was the 1989 recipient of the Ralph Tate Medal for Geology and the 1989 Homestake Prize for Economic Geology.

She gained her PhD from the University of Tasmania (Australia) in 1995 and undertook research at the Universiteit Utrecht from 2000 to 2004. In 2004 she accepted the Chamber of Mines Chair and Professorship of Mining Geology at the University of the Witwatersrand Johannesburg and was appointed Professional Professor at Wits in 2012. Kim is actively involved in geoscience research and education in South Africa and francophone West Africa.

Prof Hein served as a

She has many years of experience in the fields of metals exploration and mining, research and development, management, and geoscience education. She has specialised on the applied structural geology, exploration and mining of Archaean and Proterozoic gold deposits in Australia and West Africa. She is currently a member of the Senior Executive Team in the prestigious AMIRA WAXI P934 project (West Africa Exploration Initiative). She is actively involved in research in the Witwatersrand basin of South Africa.